I've been interested in photography on and off for at least 10 years, but it was only when my daughter was born that my interest really grew. I've managed to collect four cameras that I'd actually admit to possessing (we'll not talk about the others -- though I do admit they've taken pictures far beyond their worth).

For those critical equipment enthusiasts, this is photography on a shoestring budget.

My first camera was given to me by my Grandfather. It is a medium format Minolta Autocord that he bought back in 1959. It takes wonderful pictures, but at the moment I haven't found a place to process the film and make prints that is local.

The camera is still in decent shape, the leather has not started peeling anywhere (from what I've read it is a common problem). I recently broke the spring the holds the viewfinder cover open, but that doesn't affect the rest of the camera. There does seem to be a problem with the shutter when it is set to max speed (1/500 I think), where the film advance will trip the shutter by itself. If I remember to leave the lens cap on I can sometimes cock the shutter without advancing the film and have it work fine.

The first camera my wife and I bought together was a FujiFilm Discovery 290S Zoom. I don't remember why we picked this model or brand, except that it was the one on sale at Circuit City when we went looking for a camera. It took a lot of good snapshots before meeting an unfortunate demise in the teeth of a Foo Dog. It actually still worked last time I tried it, but the lens is scratched and camera is not worth the money to repair it.

To replace the FujiFilm we were given a Canon SureShot 85. It took over very well from FujiFilm and we used it to take most of the pictures of our firstborn baby's first six months.

Generally this camera produces sharp pictures. I have found that the auto-focus doesn't always make the right decisions, but if you can lock the focus on your subject, you can usually make up for that.

At the time I started looking for a digital camera, I was surprised to find that the Sure Shot was held in high regard by many reviewers. That influenced my decision later on to buy another Canon. 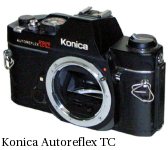 In 2003, I finally felt the limitations of using a point-and-shoot camera and sought something better. Even thought I had the Autocord, I preferred to use 35mm film for experimenting since it is cheaper to process. So I borrowed one of my Grandfather's older cameras, a Konica AutoReflex TC, that he bought in 1978. A majority of the pictures in his collection were taken with this camera and I knew it could produce excellent pictures. Camera operation is completely manual, except for the AE mode which will set the aperture based on the internal light meter.

I borrowed two lenses to start out with, a 50mm Hexanon (f/1.4, not the one that comes standard with the camera), and a 85mm Hexanon (f/1.8) for portraits. The 50mm is fast enough for hand-held pictures inside without flash, and it gives a field of view equivalent to what one would see with only one eye open (i.e. the traditional 50mm view). These are high quality lenses, but unfortunately, due to their construction, they will only work with Konica cameras, which are no longer manufactured.

For those interested, you can learn more about the Konica and Hexanon equipment at The Konica SLR User's Pages.

In the Spring of 2004 I started contemplating a way to avoid the backlog of film rolls waiting to be taken to the developer and had started eying digital cameras. I knew that most of them were way out of my budget (especially a DSLR) and started looking for something to just replace the Canon for now. Maybe not so surprisingly, I ended up looking at Canons again and after reading the reviews on Ken Rockwell's website, I started looking at the Canon PowerShot A series. Finally, after a lot of research, I found a nice deal on amazon.com where they were offering the A60 for about $150.00 and including a free 64MB CF card. It was too good to pass up; you can't get much cheaper on an entry-level digital.

The Canon A60 has fulfilled it's requirements exactly. I wanted something to replace the SureShot 85, that would be cheaper to operate, and still could still be able to make 4x6 prints if needed. So far I've made up to 5x7 prints (through Walmart and Snapfish) and the pictures have been nice and sharp. My monitor is not color calibrated and so even though I've often used the "vivid" setting on the camera, it isn't that noticeable when viewing the pictures on screen. Prints are another matter. Not that it looks bad, but the colors are so saturated that I've started to using the normal or neutral settings see if I like the results any better.

On a technical note, I found some interesting information about the lens. The focal length of zoom lens on the A60 is listed as 5.4mm - 16.2mm and is said to be the equivalent of a 35mm - 105mm zoom lens on a 35mm camera. Using some conversion notes that John Kim posted on the photo.net forums I got the following equivalents for lens length and f-stop:

My newest camera is a Nikon (March 2007). I waited about two years for the prices on DSLR cameras to drop into my price range. For a long time I had been looking at Pentax's entry level DSLRs, but when Nikon came out with the D40 Kit for such low price, I knew that it was the one I wanted.

Right now my primary subjects are two little girls and the D40 works great for that. I'm not sure it helps taking better pictures, but I can take more, faster, and that helps me catch expressions and situations with at least one good result.

Nikon and Canon A60 pictures by Jakim Friant. Other camera pictures from epinions.com, Kenmore Camera, Canon, and Kan's Room. Used without permission.